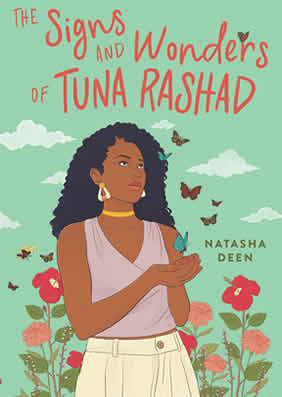 The Signs and Wonders of Tuna Rashad

From award-winning, #OwnVoices author Natasha Deen comes a new funny, honest, YA novel following one girl as she tries to win over her crush before she leaves for college.

Let’s be clear. No matter what her older brother, Robby, says, aspiring screenwriter Tuna Rashad is not “stupidstitious.” She is, however, cool with her Caribbean heritage, which means she is always on the lookout for messages from loved ones who have passed on. But ever since Robby became a widower, all he does is hang out at the house, mock Tuna for following in their ancestors’ traditions, and meddle in her life.

Tuna needs to break free from her brother’s loving but over-bearing ways and get him a life (or at least, get him out of hers!). Based on the signs, her ancestors are on board. They also seem to be on board with helping Tuna win over her crush, Tristan Dangerfield. The only hiccup? She has to do it before leaving for college in the fall. A ticking clock, a grief-stricken brother, and a crush who doesn’t believe in signs. What could possibly go wrong?

The Signs and Wonders of Tuna Rashad offers all the beats of a healing journey and brings to life the theme that ‘a heart in love is the loudest sound in the room.
-Quill & Quire

A well-balanced text that expertly weaves together humour and romance with themes of grief so as not to make the topic feel overly heavy […]Filled with unique and interesting characters and an engaging plot, the text is likely to elicit the full range of emotions from readers.”
-CM Magazine

Genuine growth is hard to script but easy to find here.
-Kirkus Reviews

Effervescent and irrepressible, Tuna Rashad will leap off the page and straight into your hearts.
-Nafiza Azad, author of The Candle and the Flame, The Wild Ones