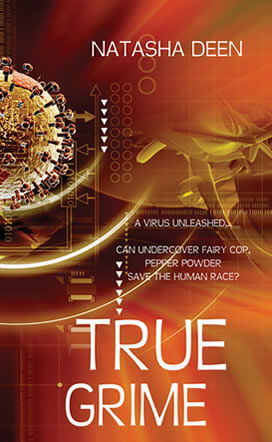 Grime cop and teen fairy Pepper Powder lives for one thing: protecting the human species from magical zealots who seek to eradicate them with Violent Illness of Unusual Resistance and Strength (humans call them “viruses,” but their mistake is understandable. The very young often get their words wrong.). When a terrorist leader releases a necrophage bomb, it not only decimates Grime headquarters, it turns Pepper into the magical world’s first fairy amputee—but she’s not going to let a little thing like a missing leg stop her. To catch her criminal, and prevent him from unleashing a V.I.U.R.S in one of the human world’s biggest shopping centers, West Edmonton Mall, she goes undercover as a human. But once Pepper’s theories of humanity collide with the reality of bullies, cliques, and environmental destruction, will she still believe humanity’s worth saving?

Natasha Deen makes a compelling read in True Grime…Surprising twists, along with witty commentary and kick-ass personality keep the book lively and begs readers not to stop…After the last page, readers will be craving a sequel.”
-San Francisco Book Reviews 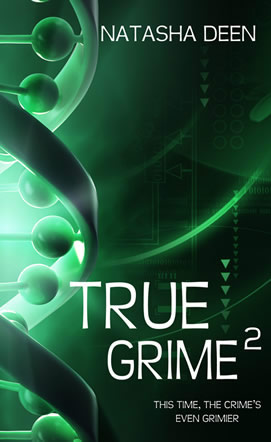 For the last two years, human Aponi Runningbear has been training to be part of Grime, the magical police division tasked with protecting humanity from SOAP terrorists. But things aren’t going well. She’s barely keeping up with her studies, failing the physical component, and her Generalized Anxiety Disorder is making her bad days even worse. When her team is given the chance to find a missing coworker and stop SOAP from producing a DNA-altering drug that’s killing humans, Aponi grabs hold of the chance to show she’s meant for Grime. But as the investigation heats up, she’s forced to deal with the tormentor from her past, dead bodies, and the certainty that SOAP’s going to win this battle. Humanity’s dying, Grime’s in trouble, and she’s failing…does a foster kid really have what it takes to save the world and herself?

A good paranormal sci-fi read that is filled with action and suspense.”
-Cozie Corner