When Screen Writers Lose Me… 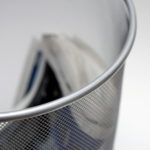 Though it’s frustrating, I kind of like bad writing because it showcases stuff I need to avoid in my work…