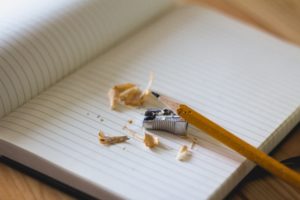 2003 & 2004, I was a one-woman wrecking and renovation crew, updating our home. I remember very long days laying laminate and painting (so much so, the idea of picking up a paint brush still triggers my gag reflex). 2004 was also the year of serious medical issues with a close relative, where I was the main caregiver. I would grab a moment here and there, while at the hospital bedside, and scribble a note or two, but full-time writing? Not likely.

It took a moment for 2017 me to put my nose back in order and stop huffing, and realize when I called myself a full-time writer, it wasn’t about the investment of hours. I took the title to say to the world, “This is what takes up my mental and emotional time. I do no other thing.”

And 2004 me gently reminded 2017 me that to a large extent, my days still don’t always look like 8-10 hours of writing. Case in point. I’ve been working on a manuscript, and by working, I mean writing, deleting and writing some more.

I’ve been doing this since November 2016 with disastrous results. The manuscript just won’t get traction. At first, I wasn’t worried. December was coming up; things would slow, and I would have unlimited time.

Now I’m on January 4th and still on page one (though with about 20,000 words deleted). So my days are much like my days of yore, save a difference.

Now, I have the comfort (sort of) of knowing that the block will eventually work itself out because I have years of trying & failing & trying & succeeding behind me. And unlike days of yore, when I would get frustrated and spend the rest of the day in a chocolate-induced haze, watching trash TV, now I know to stay in my chair and keep going. That even if I have to delete a page (or 80), the windy road will eventually find me home.