Join us on October 6th!

Register for the event via EventBrite 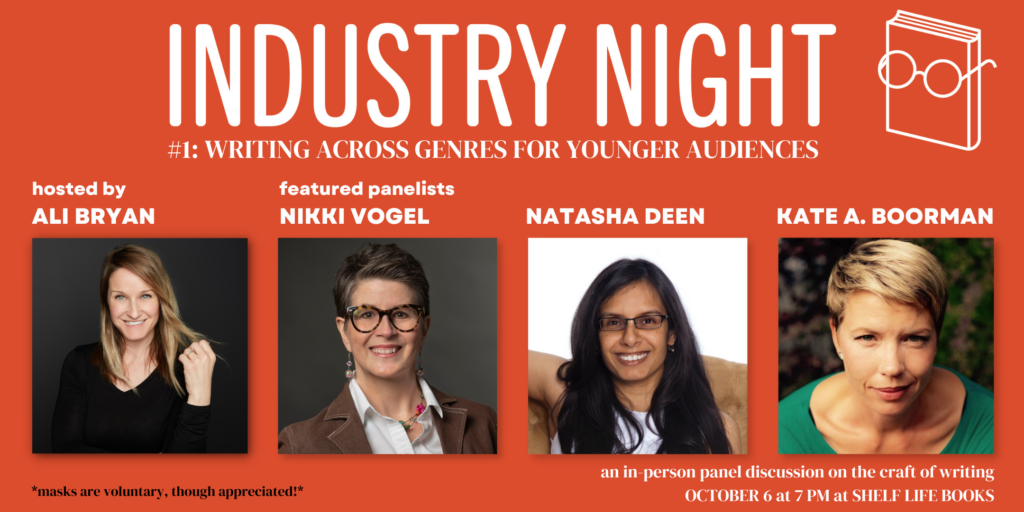 From the EventBrite site:

Join Shelf Life Books for our very first Industry Night, a monthly panel discussion on writing, publishing, and all things books! Each event will feature three panelists and an expert moderator/host. This month’s theme is Writing Across Genres for Younger Audiences. Participants will explore the challenges and triumphs of writing across genres (mystery, sci-fi, fantasy, horror) for younger audiences (middle-grade to young adult).

If you’d like to attend, please register! We have limited capacity, so registration is recommended.

Though masks are voluntary, they are appreciated!

Ali Bryan is an award-winning novelist and Pushcart Prize nominated creative nonfiction writer who explores the what-ifs, the wtfs and the wait-a-minutes of every day. Her first novel, Roost, won the Georges Bugnet Award for Fiction. Her second novel, The Figgs, was a finalist for the Stephen Leacock Memorial Medal for Humour and her YA novel, The Hill, was longlisted for the 2021 Wilbur Smith Adventure Writing Prize. Her short stories and essays have been published in literary journals and magazines in Canada, the US and the UK. She is a Lieutenant Governor of Alberta Arts Awards Emerging Artist recipient and was longlisted for the 2022 Commonwealth Short Story Prize. She has three novels forthcoming in 2023. Bryan lives in the foothills of the Canadian Rockies on Treaty 7 Territory, where she has a wrestling room in her garage and regularly gets choked out by her family.

Nikki Vogel has had poetry published in Room Magazine, filling Station, and The Istanbul Review. Her short stories have appeared in Luna Station Quarterly, Infective Ink, Empty Sink Publications, and in One Throne Magazine. She has had a few stories anthologized, including in You Can’t Kill Me, I’m Already Dead and Behind the Yellow Wallpaper: New Tales of Madness. She was a runner up in the 2012 Little Bird Writing Contest and in 2015 had a story listed as Notable Science Fiction in The Best American Science Fiction and Fantasy. Silencing Rebecca is her first book publication. She lives in Edmonton.

Guyanese-Canadian author Natasha Deen has published over forty works for kids, teens, and adults, in a variety of genres, and for a variety of readerships. Her works include the Junior Library Guild Gold Standard Selection Thicker than Water, Guardian which was a Sunburst Award nominee, and the Alberta Readers’ Choice nominated Gatekeeper. Her YA novel, In the Key of Nira Ghani, won the 2020 Amy Mathers Teen Book Award and her upcoming novel, The Signs and Wonders of Tuna Rashad, is a CBC Top 14 Canadian YA books to watch for in spring 2022. When she’s not writing, she teaches Introduction to Children’s Writing with the University of Toronto SCS and spends an inordinate amount of time trying to convince her pets that she’s the boss of the house. Visit Natasha at www.natashadeen.com and on Twitter/Instagram, @natasha_deen.

Kate A Boorman is an author from Edmonton, with roots in the small town of Rimbey, Alberta. She writes speculative fiction and has a particular fondness for abandoned places, memory, and the darkest parts of the forest. The first book in her acclaimed Winterkill trilogy won the R. Ross Annett award for Children’s Fiction in 2014. Her YA thriller, What We Buried (Henry Holt), was a Banks Street College of Education Best Books. Her books for young readers have been published in four world territories and have appeared on a variety of Best Of lists, from O! The Oprah Magazine to the Ontario Library Association. Kate’s newest thriller, Into The Sublime, released to two starred trade reviews, and is a Junior Library Guild Gold Standard Selection